A university contacted RS Hydro to purchase instrumentation for a project aiming to understand how carbon is cycling through peatland ecosystems in Peruvian Amazonia. It is suspected that what determines where peat accumulates has something to do with the flood duration period or water chemistry, but this theory needs testing. 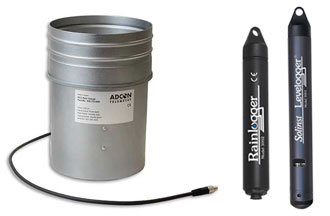 The Solinst LTC levelogger, a Solinst rain logger and an RG-1 rain gauge.

Peatlands are found worldwide, including in the tropics, but until the last decade or so, people thought that peatlands in the tropics were mainly found in South East Asia. However, in recent years, studies have shown that extensive peatlands can also be found in Amazonia and central Africa. Unfortunately, peatlands in South East Asia have undergone extensive destruction, mainly because they have been converted to oil palm plantations and farmland, which has led to biodiversity losses but also very large greenhouse gas emissions (as peatlands store very large amounts of carbon*). In South America and central Africa the peatlands are still relatively undisturbed. However, because these ecosystems went unnoticed by the scientific community for so long there is very little data from them, so our understanding of how these ecosystems work is very limited, which in turn limits our ability to put in place good land management practices which would help conserve the peatlands.

The project is about trying to understand how carbon cycles through the Peruvian peatlands. The university will be measuring things like tree growth rates (the peatlands are forested at the monitoring sites), root growth rates, plant litter decomposition rates and will also be looking at peat accumulation rates using radiocarbon dating of the peat, to gain an understanding of all the inputs and outputs of carbon to the peatland system. The loggers and rain gauges will be used to measure watertable fluctuations and rainfall in the peatlands, as carbon accumulation in peatlands is strongly linked to hydrology. Water table fluctuations will also be measured in other wetland ecosystems which do not accumulate peat.

It is suspected that what determines where peat accumulates has something to do with the flood duration period or water chemistry, but this theory needs testing.

Ultimately, if you can understand what effects the rates of carbon inputs and outputs, you can gain an understanding of how these peatlands might respond to any future reductions in rainfall, or any changes in land use that affects the hydrology of the ecosystem, which could potentially threaten the ecosystems ability to uptake and store carbon.