Clamp on heat meters are now widely used in the industrial and building sectors for monitoring hot water systems and energy efficiency monitoring. The simplicity and reliability of clamp on heat meters have seen their widespread adoption throughout the world as an accurate and reliable method of quantifying heat energy consumption. Clamp on heat meters can be used on any pipe size or material, are non-invasive and therefore not prone to the levels of deterioration that are seen by normal intrusive heat meters. 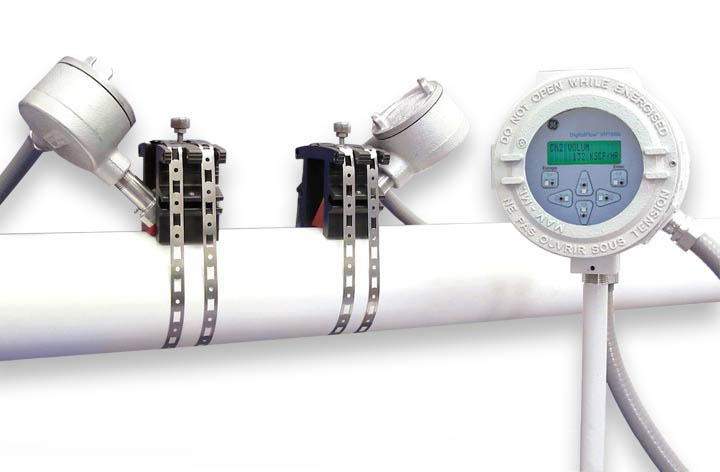 RS Hydro supply a range of clamp on heat meters for energy monitoring applications: cooling or heating. Users can have either integrated heat meters with only one transmitter or choose the most preferred flow meter with a suitable output for the heat calculator. RS Hydro offer clamp on temperature sensors or insertion sensors installed using pockets.
IN STOCK 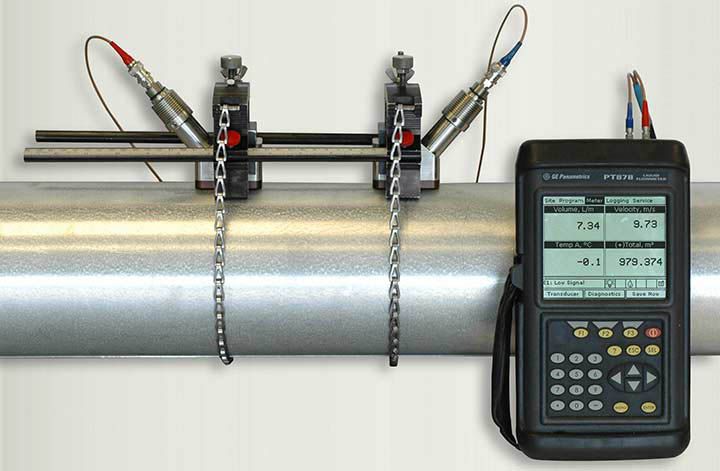 By attaching two temperature sensors (PT100) to the flow meter and establishing the density and specific heat capacity of the liquid, it is possible to establish the heat flow between the inlet and outlet. Our clamp on heat meters help energy managers to not only establish total energy consumption but also to create heat balances and isolate individual energy consumers within large factories or buildings. By using a portable flowmeter it is possible to undertake comprehensive energy surveys quickly and efficiently. Permanent non intrusive heat meters can also be installed at any suitable location.

In its simplest form, the heat consumption is proportional to the temperature change between the two attached temperature sensors. To calculate the exact heat flow, the specific enthalpy and density of the liquid need to be known. However, some liquids are non-compressible and as such any variations due to large-scale changes in pressure are neglible. Our heat meters consist of two 24v active inputs which can be used to measure the temperature differential. Available ultrasonic transducers and temperature sensors allow flow measurement and heat balances to be conducted over the -100 to +250 degrees C range.

Due to their accuracy, reliability and flexibility, the ultrasonic flow meter is the preferred method for establishing in-situ flowrates. With an integrated wall thickness gauge and specialist pipe diameter tape measure it is possible to establish the exact external diameter and pipe wall thickness of the pipe work. Once the internal diameter is established and using ultrasonic theory the two attached ultrasonic flow transducers can be used to establish the differential transit time of the fluid. The transit time is proportional to the liquid velocity.

By establishing the temperature differential, in-situ flowrates and the coefficients it is possible to calculate the heat quantity. The integrated datalogger can record 100,000 data points which can incorporate any measurand, diagnostic parameter or signal input. All data is recorded in non-volatile memory and as such will not be lost due to a lack of power. The integrated battery can power the flowmeter for up to 8 hours and up to 7 days with an external battery.