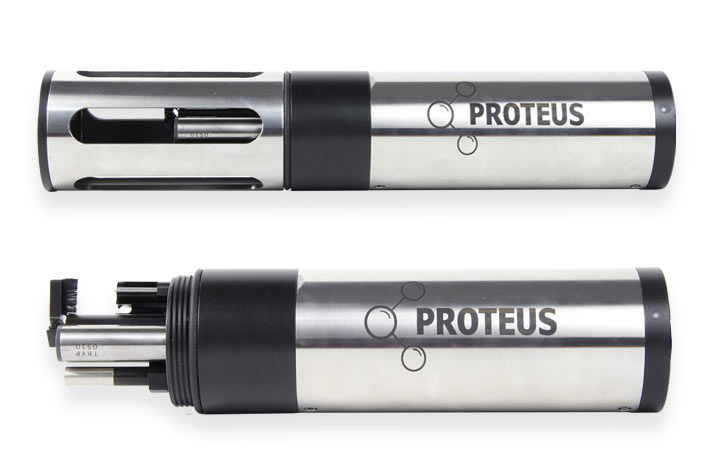 The Proteus BOD is a multi-parameter, real-time sensor platform that accurately and reliably measures BOD in open channels. Over the last century significant improvements in the water quality of European rivers have been apparent (see Fig. 1). This has primarily been due to improvements in public sanitation and governmental legislation. However, both point source and diffuse pollution still pose a threat to the quality of our natural waters. The BOD5 test was selected in 1908 as an indicator of organic enrichment in water bodies by the U.K Royal Commission on River Pollution. Then, in 1936, the method was adopted by American Public Health Association Standard Methods Committee as a reference indicator to evaluate the biodegradation of chemicals and hazardous substances. Briefly, the parameter is defined as the amount of oxygen taken up through the respiratory activity of microorganisms growing on organic material in the sample. The test is conducted in airtight bottles (see Fig. 2) in the absence of light and under a controlled temperature (20°C ± 1°C) for a set time period. The widely employed 5 days interval was selected as this the time taken from source to sea for the longest U.K river. Hence, the parameter provides a measurement of the carbonaceous organic pollution of water that can be degraded biologically and is expressed in milligrams of O2 per litre. However, in some waste waters nitrification can occur more rapidly than in natural water samples (see Fig. 3 and Table 1) and needs to be controlled for with the addition of inhibiting compounds. The BOD5 has a wide range of applications:

i.    it is one of the parameters used under the WFD to assess  the chemical quality of water bodies (see table 2);

ii.    it is used to confirm wastewater discharge and the waste treatment procedure meets criteria set by regulators (see table 3);

iv.    COD/BOD5 is also used as an indicator of the size of a wastewater treatment plant required for a specific location.

Problems with the BOD test

Despite the test being long entrenched in legislation there are substantial deficiencies associated:

I.    the long lead time until results are available (5 days) can lead to environmental damage having occurred before the data is available;

II.    the test is time consuming and expensive;

III.     it fails to recreate natural processes (e.g. incubation is conducted in the dark);

IV.    results are not always simple to interpret as a low value can be due to high organic content that is not readily degraded or that degradation is inhibited by toxins;

V.    it is imprecise and has a high minimum detection limit thus is not applicable to clean/uncontaminated river samples;

VI.    the accuracy/repeatability is low with measurement variability in certified laboratories as high as 20%;

It is clear that a move from traditional laboratory testing to in-situ (real-time) monitoring would help to alleviate some of the problems outlined above. It would immediately address points I - III and would help to improve spatial temporal resolution of monitoring that would be directly beneficial to basin managers, water companies and legislators alike.  Furthermore, precision and accuracy of potential optical methods (i.e. fluorescence) are likely greater than the laboratory assay.

Proteus BOD: a fluorescence based sensor platform a tool for real-time BOD monitoring

. As part of a Knowledge Transfer Project  RS Hydro have undertaking detailed research exploring the use of in-situ fluorescence as a technique to enable real-time BOD measurement. The Proteus BOD (See Fig. 5) is a multi-parameter instrument that incorporates a tryptophan-like fluorescence (TLF) sensor, turbidity sensor (see Fig 6) and thermistor to provide real time measurement of reactive dissolved organic matter found in sewage and slurry, negating the need for a 5-day BOD laboratory analysis. Using a robust correction algorithm the tryptophan signal is corrected, in real time, for temperature interference. The result is a repeatable measurement that can provide instantaneous BOD measurement with a simple site specific calibration for turbidity and TLF relationship with BOD5. The dissolved organic matter pool can be mapped in optical spaced based on its fluorescent properties (see Fig. 6). The TLF peak (red) represents a mixture of free amino acids, peptides and proteins. This is associated with microbial activity and human/animal waste contamination. Numerous published studies have correlated TLF with BOD and faecal coliform counts.